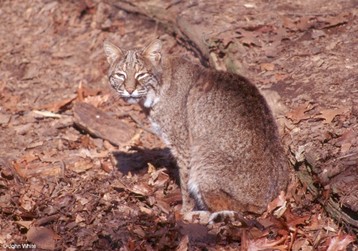 The Territory Ahead
~
A Bobcat's Tale


First published in the January/February 2013 issue of
Virginia Wildlife magazine
Old man possum trudged slowly through the darkness. Moonlight dappled the undergrowth and the silvery sheen of his coat as he snuffled under logs and mats of decaying leaves for grubs, worms, beetles and carrion. He had survived four years in this wooded area of the Deerfield Valley and his days were already numbered; possums live a very short time for mammals of their size, and his senses were wearing out from the strain of staying alive.

He never heard the creaking of a twig on the rock ledge five feet above his waddling form, never saw the blazing green eyes glaring down at him or smelled the faint musk of a killer. As he stopped to root about in a dense patch of mayapple a figure launched itself through the night and the possum was flattened by twenty-five pounds of muscular fury. The breath driven from him in an explosive whoosh, the marsupial desperately called upon a lifetime’s experience to twist himself onto his back and confront his attacker with a long snout of flashing teeth. Even in his decrepitude he was still a formidable opponent.

But he hadn’t a chance, even if he’d been in his prime. Two stout paws effectively pinned down his body, rendering him helpless in the predator’s grasp. Incredibly sharp claws dug into his sides with agonizing relentlessness. And above, gazing at him with controlled rage, hung a nightmarish form with long white whiskers, a ruffed face surmounted by angular ears, and a gaping mouth lined with murderous teeth. The mouth opened wider and descended toward the victim’s neck; the old possum’s black eyes rolled back in his skull as a cloud passed slowly over the moon.

The bobcat was only two years old that spring and had come to this valley in the shade of Shenandoah Mountain a few days ago. Finding no evidence of a rival’s presence - no pheromone-laced sprays of urine, no menacing claw marks scarring the local saplings - the young male appeared to have lucked out. Taking the still possum in his mouth, the bobcat easily leapt the five vertical feet back to the ledge, where he ate quietly, delicately, in the silent moonlight. Tonight he would kill again, and perhaps again, as he patrolled the invisible boundaries of his newly discovered world.

There may be a million bobcats (Lynx rufus) in the United States today, making them one of the more successful mammalian carnivores currently extant (another hunter thriving in our tattered wilderness is the bobcat’s occasional predator, the coyote). Adaptive and merciless, capable of stalking and killing prey much larger than itself, the bobcat possesses all the hunting prowess of its felid heritage and a ferocity that more than makes up for its relatively dainty size (forty pounds for makes, twenty-eight for females).

Bobcats have been observed killing adult deer with the classic feline attack mode of quietly approaching unknowing prey then pouncing onto their shoulders and digging in with the claws. A powerful bite to the back of the neck eventually paralyzes large prey like deer, or punctures a major vessel allowing them to bleed out. The technique is used successfully worldwide by felids as dissimilar as mountain lions, snow leopards, ocelots and serval cats. Once in the grip of those unrelenting claws there is little hope of escape.

Our friend in the Deerfield Valley displays the subdued but lovely coloration of his kin, wearing a mottled yellowish brown coat with streaks or spotting of dark brown and black. His underside is white with black spots and bars on the insides of his legs, ideal camouflage for hunting moonlit glades. Broad muttonchops of stiff hair frame a roundish face surmounted by pointed, ever alert ears.

For felines, bobcats are extremely eclectic in their dining habits, successfully hunting and consuming everything from cotton rats to cottontail rabbits, fish, birds, bugs, and fresh carrion. If a bobcat kills an exceptionally large animal it will eat its fill before covering its prey with a blanket of leaves, returning to feed for as long as the meat remains palatable.

Range estimates indicate that the bobcat thrives throughout much of the U.S. excepting a swath of the Midwest and areas along the northeastern coast. While ten miles is thought to be the approximate range of an adult male, female bobcats cover a much smaller area, about four or five miles, and their ranges often overlap those of males.

The male was too young to attract a mate this spring, and he knew that he’d have to possess an established territory by February in order to start a family (the phrase is used loosely as the female is the sole provider for her two to seven kittens). The aspiring father had listened fixedly to the otherworldly caterwauling, screaming and hisses that accompany bobcat mating, and he wanted in. So after polishing off most of the old possum (tough but tasty) he stretched himself contentedly, yawned, and leapt to a higher crag on the mountain’s flank. From there he could look down into the valley, to the spectral forms of Angus cattle grazing in the mist, the alien glare of sodium arc lights outlining a barn and farmhouse.

He didn’t need such intrusive technology to see clearly in the dim moonlight. At night his pupil slits opened wide to maximize the reception of ambient light. While he couldn’t hunt in total darkness like some owls, and was unable to depend upon smell to guide him as coyotes and wolves do, the bobcat was possessed of almost unrivaled color vision. His eyes’ abundant cones allow him to distinguish color, interpret fine detail, and detect even infinitesimal movement. The eyes’ rods respond instantly to changes in light intensity that can affect perception. This exceptional package allows the bobcat to lie quietly and discern the slightest movement even in lowlight conditions.

Usually between twenty-five to thirty inches long, bobcats stand fifteen to twenty inches tall at the shoulder. Our cat has already reached his adult height and weight, and tonight he has traversed five miles since his kill, periodically stopping to scent-mark selected trees and stony outcrops so as to warn other wandering males that this area was claimed. Bobcats, especially males, generally avoid one another when possible; territorial battles can easily cause crippling injuries (as their horrific sounds can attest) so a clearly defined boundary is essential for keeping the peace.

Growing slightly peckish again from all this walking and jumping our cat finds a suitably elevated prominence and settles in to his waiting game. While bobcats can and do stalk prey when it’s happened across, some of the more profitable hunting, especially in new territory where the local critters’ habits are as yet undiscovered, is to ambush from on high. While waiting and watching, he slowly rotates his sitting position so as to take in a full 360° view; daylight will display a neat circle of outward-facing paw-prints pressed into the moss.

Growing restless, the cat sets out again. He is looking for a means of silently crossing a rocky chasm when he detects movement on the other side. There, nibbling the fresh green leaves of a boxwood, he sees two spotted fawns and their mother. The bobcat stares, flexing his toes in excitement. The deer are paralleling the defile, quietly moving uphill. The cat follows from his side, occasionally checking his footing as he floats like speckled smoke toward the gorge’s convergence just ahead. He will intercept the deer in moments.

He has chosen his attack point, a solid chunk of limestone overlooking the deer as they continue to browse, and is preparing himself for the ten-foot jump onto the closest fawn when the doe freezes, snorts, and stamps her foot. But she’s not looking at the bobcat, who follows her gaze uphill. He too can now hear the clumsy sound of something big and deliberate moving toward him. From a thick stand of mountain laurel steps the great mass of a black bear, still hungry from hibernation and grumbling to himself as he scents about for breakfast. The deer turn and bolt back down the side of the mountain, the bear stares after them in surprised astonishment, while the bobcat, cursing, drops soundlessly from his perch and retraces his steps downhill. The bear isn’t much of a threat to him personally but bears are unpredictable, hungry ones even more so, especially after they’ve seen their breakfast opportunity bounding away before their nearsighted eyes.

This is probably far enough anyway, our bobcat reasons. Almost seven square miles of prime habitat, which according to the night’s olfactory inventory contains plentiful populations of squirrels, skunks, possums (minus one), mice, deer and, closer to the pastures below, rabbits and groundhogs. What more could a lethally efficient medium-sized predator ask for?

He returns to the site of his kill at a higher elevation, practically to the mountain’s spine, to enclose a nice oval-shaped zone of personal space for sustenance and the distribution of his genes. The moon has set and a pinkish glow is growing to the east over the distant Shenandoah Valley when he comes across the bloodstained crag he had feasted upon. Somebody (a despicable red fox, according to his nose) had snatched the gutpile and carcass he’d reserved for an emergency breakfast should a second hunt not succeed.

No matter. Tonight had been a glorious introduction to his new home territory, a bountiful and welcoming niche he could contribute to and take from for the rest of his life. A few hours ago, high in the boughs of a mighty white oak, he had discerned, like a whispered promise, the tingling scent of a female bobcat floating down the mountainside. Perhaps by this time next year she would be bearing his children. The thought gave him pleasure as he tiredly crept into a deep crevice in the rock to dream moonlit dreams. He had found his home.