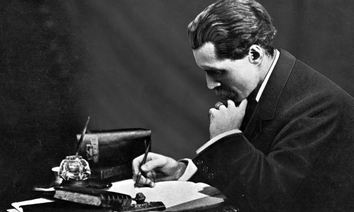 First published in the August-September issue of
Outdoors Unlimited magazine
A year ago last January I determined to become a full-time freelancer, swearing off the legal work that had kept the lights on for years. This despite my almost total lack of knowledge about the trade itself, as while I’d been publishing occasional pieces in magazines since 2008 I had never taken an actual course in writing, much less journalism, still less the intricate art and science of crafting pitches that editors would actually read, and perhaps assign. My last grammatical education was in the sixth grade but I felt that the independence and creative allure presented by being a Professional Writer were too much to ignore, so with little in the way of foresight or planning I leapt into the void of artistic endeavor and financial anxiety.

The vision of hammering industriously away on a laptop from your couch—bare feet propped comfortably on the coffee table and cup of tea at hand, queries and submissions winging their merry way into the ether, your name in lights and in print and occasional checks appearing in the mailbox while your buddies stew away in their high-rise hutches—was and is a persuasive argument on behalf of undergoing this kind of abstruse journey, but for those contemplating a similar plunge I wish to offer some kindly words of advice, not to dissuade you from following a similar path but to lay a little preparatory groundwork in such a way as to bolt from the gate with a level and certain stride. My own case was somewhat different.

My previous publishing history had been generally limited to hook-and-bullet magazines issued by a couple of state wildlife agencies in my native South, but like all of us I aspired, perhaps a bit too hastily, to place stories in the rarified pantheon of the principal national publications. So having done minimal research on the freelancing racket I pitched my very first proposal as a wholly independent writer in January 2013 to National Geographic, an act of supreme insolence born of simple ignorance. Addressed simply to “Features Editor” and lacking a letterhead or return envelope, my idea would necessitate a trip to Africa and the services of a seasoned wildlife photographer and professional guides to undertake safaris in five different countries. A modest proposal, but somehow I failed to hear back.

Much sweat and toil has been expended on my personal education since then and I like to think I have somewhat sharpened my approach to editors, women and men I no longer regard as aloof demigods dispensing cold silence or soulless rejections from their elegant penthouse suites but as working stiffs like myself dealing with, if not greater penury, at least more hectic and demanding schedules. And while I’ve met very few of them personally I have come to regard my regular editorial contacts as a kind of extended professional family, a sprawling network that collectively I hear from—with good news and bad—more often than from my own kin. Once you piece together the multifaceted puzzle of querying, of making a frantically busy editor hesitate over the Delete button just long enough to read your subject line, and then the email body, and then the attachment, half your job is done. And the associate editors who do most of the grunt work at the big magazines are not ultimately the target for your pitch: it’s the readership itself, as embodied in senior editorial staff and ultimately in the publisher, that you must sculpt your proposal to suit, because like Caesar enthroned at the gladiatorial arena they are the ones with the final say as to whether your story lives or dies.

I’ve been asked what my typical day is like, and I suspect it’s like that of many of my colleagues. I awake comfortably late in the morning and read the news at length, check email, then go through my Queries folder to ascertain the status of various pitches. For non-time sensitive stories I try to give the editor two weeks before politely asking whether the idea was still under consideration, repeated weekly a couple of times if there’s no reply (this certainly still happens) before notifying the editor of my intention to pitch elsewhere if I hear nothing back shortly. This final tactic has worked numerous times, often accompanied by an apology and reference to a swamped inbox. If no reply is forthcoming or if the story is passed on it is repackaged as another pitch, its tone and content carefully adapted to fit the differing editorial style of the new publication. It really is really just a matter of finding the sweet spot of the Right Story shown to the Right Editor at the Right Time; half a dozen editors rejected one idea before it was assigned—three months after it was initially pitched to them—by a prominent British history magazine, for whose audience the subject matter (an outbreak of violence in early twentieth-century Kentucky) was enticingly exotic. In these struggling early stages one acceptance can instantly erase months of bitter slogging, but the thing to remember is not to take even the silent treatment personally. As a mentor advised, if you hear back it means something and if you don’t hear back it doesn’t mean anything.

I’m still a neophyte in many ways, and the strictly autodidactic approach to this or any other profession is not one I would necessarily recommend. But I’ve found that if you take advantage of every opportunity for education, if you join groups like OWAA that work to share the load of the creative life, and if you can combine inborn talent with the kind of stubbornness that would make a dyspeptic mule cringe, freelancing can be a workable and immensely gratifying vocation.
Powered by