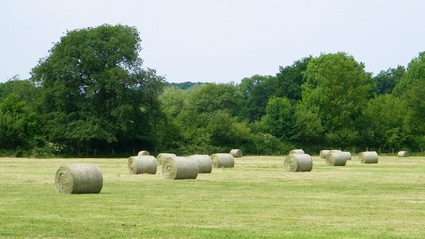 First published in the November 2008 issue of
Virginia Wildlife magazine
Virginia has seen explosive growth in the last several decades. While the rate of population influx from other states and countries has been enormous, the acreage of land being developed into suburbs, shopping centers, golf courses and freeways has been significantly higher. Today even the most rural areas of the Commonwealth, previously spared the unsupportable increases in property values that accompany aggressive land speculation, are experiencing unprecedented pressure to develop their open spaces, family farms and working forests.

Hundreds of thousands of retiring urban baby-boomers can use the Internet to virtually access even the most remote Appalachian hollows to hunt for real estate, and the traditional inhabitants of these areas are finding it difficult to refuse their offers. Landowners desiring to keep their property intact are faced with a series of financial complications that, without proper guidance, may make passing land down to their children financially impossible, eventually forcing them to sell it off for development.

An accelerating factor in the ongoing loss of open space and farmland is the fact that individual titleholders to private interests in land are growing older, with a median age of 55-65 years. A nationwide turnover in title over the next several decades will be the inevitable result of the economic and demographic situation we currently face and will affect millions of acres of open space. Now is the time for Virginians to take proactive steps to save the land they love.

What is a Conservation Easement?

Voluntary restrictions on land use that pass with the title in perpetuity, conservation easements are the most popular and successful means of preserving family lands. Essentially, conservation easement donors permanently relinquish the right to intensively develop their property; the donation is made to an easement “holder,” typically a non-profit land trust like The Nature Conservancy or a state body like the Virginia Outdoors Foundation, the Department of Forestry, or the Department of Game & Inland Fisheries. These donations lessen the land’s market value, which is based on its “highest and best use,” usually interpreted as being commercially developable real estate, by limiting its development potential in favor of protecting specified conservation values.

Landowners who donate conservation easements as charitable gifts for public benefit can generally claim both federal income tax deductions and state income tax credits. Title and all other rights in the property—rights to sell, gift, and bequeath—remain with the landowner, as does the right to use the land in any way that doesn’t harm its recognized conservation values.

Attributes that pose attractive opportunities for easements include farms, forests, wildlife habitat, historic areas such as battlefields, property of particularly scenic beauty enjoyable by the public, outdoor recreation areas, and property contributing to a riparian buffer zone along a stream, creek or river. Riparian easements are particularly suitable for stringing together intact pieces of forested habitat by providing vegetated wildlife corridors for such far-ranging species as the black bear. The larger and more intact a property is, and the nearer it is to encroaching development, the more likely it will have higher conservation value, though acreage alone will not necessarily be a determinant.

Recognizing that easement donation and the protection of open spaces is in the public interest, the federal and state governments offer a number of tax incentives to landowners seeking to preserve their land from development:

·        Estate & Gift Tax Benefits: The donation of a qualifying conservation easement will not have gift tax consequences and will remove the value attributable to the easement from the donor’s estate for estate tax purposes. An additional exclusion of up to 40% of the value of the land under easement from estate tax may be available as well.

·        Federal Charitable Income Tax Deduction: Generally equal to the value of the easement (see below), the deduction can be used to reduce the donor’s “adjusted gross income” by up to 50% (or 100% for taxpayers making 50% or more of their income from farming or forestry during the year of donation) per year for sixteen years or until the easement value is used up.

·        Virginia Land Preservation Income Tax Credit: The state tax credit can be used to offset the donor’s Virginia income tax liability dollar-for-dollar, and any unused credit can be transferred by gift or sale to other Virginia taxpayers. This ability to sell the credit for cash makes it particularly attractive to easement donors who do not have significant Virginia income tax liability.

Here is an example illustrating the benefits an easement donor might realize from the Virginia land preservation tax credit. Dave and Debbie Jones have a 500-acre farm valued at $2,000,000 near rapidly growing Winchester. The Joneses raise hay, beans, and beef cattle, and their farm also includes a considerable acreage of hardwood forest that is selectively logged and is home to bear, deer, turkey, migrating songbirds and other wildlife. An avid fly-fisherman, Dave Jones fences his cattle from the trout stream that flows through the farm. The farm is visible from two state roads and offers a pleasant view to motorists. The Joneses have been approached several times by real estate speculators eager to subdivide their property, but hoping to keep the farm in the family they have rebuffed all offers. Aside from the land itself they have little else in the way of real assets.

The Jones property has significant conservation values: farm and forestland, wildlife habitat, water resources, and scenic assets. Working with a conservation advisory organization, the Joneses choose to preserve their family farm through a conservation easement which allows for the future construction of a guest cottage near their home, the expansion of their current home, and the construction of a two more houses and cottages or garage apartments elsewhere on the property. The easement, which is consistent with the county comprehensive plan, allows for the division of the property into as many as three parcels but precludes most commercial uses other than farming and forestry. Hunting, fishing, hiking, riding and other traditional outdoor uses will continue unabated.

The Joneses’ appraiser estimates that the easement will reduce the value of their land from $2,000,000 before the donation to $1,200,000 afterwards; thus the “value” of their easement is the difference, or $800,000. Assuming that their easement and appraisal were drafted by knowledgeable professionals and qualify under applicable law, the Jones family will be entitled to a transferable land preservation tax credit equal to 40% of their easement value of $800,000, or $320,000. Most easement donors use some of their credit to pay their state income taxes and sell the rest through professional mediators.

There are several myths about conservation easements that deserve to be dispelled. The first falsehood is that by donating an easement the landowner is somehow “locking up” his land for future uses. In fact, the only land use right being given up is a right that people who love their land don’t want anyway: the right to destroy what is special about it.

Another myth is that easement donation means that the government will be taking over the land. The job of the easement holder, whether it’s a government agency or a land trust, is to ensure that the terms of the deed of easement protecting the property’s conservation values are honored over the long term, usually through an annual site visit. As we’ve seen, title to the property under easement remains with the landowner.

Finally, the decision to allow public access to property being placed under easements resides entirely with the landowner—there is no requirement for public access in the great majority of easements.

Potential easement donors should note that the federal income tax incentives described above currently expire at the end of 2013, and readers should consult a qualified tax professional about these incentives as the federal charitable income tax deduction in general, and the deduction for conservation easement donations in particular, are like much else in a state of flux given the ongoing federal budget negotiations.

The Last Best Chance to Preserve Virginia’s Quality of Life

Conservation easements allow landowners to pick and choose what uses will be allowed on their property now and in the future by placing restrictions on undesirable practices. Easements are flexible agreements that specifically tailor land uses according to each donor’s individual preferences. Working foresters might want to retain the right to selectively log stands of timber on their property while being amenable to restrictions on future building.

Farm owners desiring to continue farming or grazing may give up similar developmental rights and may derive further benefits by pledging to follow agricultural practices supporting wildlife habitat and clean water. Hunting clubs will want to maintain food plots and forested tracts to maximize wildlife diversity. The terms of a conservation easement’s final appearance are negotiable so long as the property’s identified conservation values are protected in perpetuity.

Conservation easements are the most advantageous means for private landowners to retain ownership of their property while making certain that it remains protected for their descendants for decades and even centuries to come. The rolling farmlands, forested mountains, coldwater streams and coastal wetlands that make Virginia what it is are being lost to us at a shocking rate. Each year America’s birthplace becomes a little more like those other parts of the country we’d like to avoid … destroying one locale we move on to the next, stay for a time, then blunder off to the next unspoiled countryside, leaving in our wake another metastasizing sprawl of asphalt and concrete, neon and brushed aluminum that soon becomes only another place to escape from.

We are abundantly fortunate in Virginia to have the most generous tax incentive program in the country, a recognition on the part of elected officials that our wildlife and rural heritage has meaning and dignity. Donors of conservation easements not only honor themselves and their families with their generosity—by preserving signature examples of the natural splendor we have inherited, they provide all Virginians with at least a vestige of the wide world that was once all around us.
Powered by