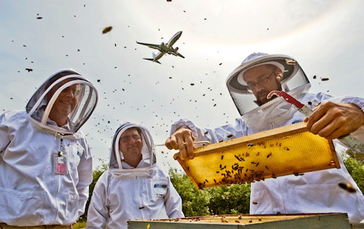 An Unnatural Silence
~
Colony Collapse Disorder and the Pollination Crisis

First published in the January/February 2014 issue of Grit magazine and online here
Where bees are, there is honey.
Early 17th-century proverb

Summer months in the American countryside bring with them a number of reassuring sensations: sweltering heat offset by welcome storms, the clanking of bullfrogs in creeks and ponds, luminous songbirds flickering about in the treetops, and from field and hedgerow, coming and going with an earnest symmetry, rises the industrious droning buzz of the honeybee. From wild hives in hollow snags to the enormous amalgamated beehives veiled in netting and towed from orchard to orchard on the back of tractor-trailer rigs, the Western honeybee (Apis mellifera), originally a native of Eurasia and northern Africa, is now as American as Honey Nut Cheerios. But this pretty little bug, long a critical component of the world’s agriculture, today is facing an existential threat that if not addressed in the short term will result in catastrophic losses across the farming industry.

In late 2006 entomologists were alerted to a troubling phenomenon. Rural residents across the country were suddenly reporting emptied beehives. It was as if the hives’ workers (infertile females) were suddenly seized with an impulse to flee their sanctuary, leaving behind no trace or explanation for their absconding. At times the golden honey itself, raison d'être of the bees’ legendary industriousness, was left behind, uneaten and unutilized, in the comb. On some occasions even more precious components of their cooperative lifestyle were abandoned, including pupae and, incredibly, the unprotected queen herself, a heretical act of desertion unknown to occur among healthy bees.

Something alarming was afoot, and as the vanishings spread like a shroud of silence over the continent’s farmland, agronomists became duly apprehensive about the future. Without honeybee pollination many of our most common crops would fail to fruit, leaving us without our melons and pumpkins, our peanuts and macadamias, our sunflowers, our onions, our avocadoes, apricots and almonds. Pollination by bees, or entomophily, had been taken for granted by humankind since the Neolithic era over 12,000 years ago. Now our dependable little allies were abandoning their posts, leaving growers with an uneasy sense of having taken something essential too long for granted.

Like ants, bees are collective animals, or “superorganisms.” The component creatures – the workers, drones (stingless males) and queen – together form a single, interdependent, mutually reliant zoological unit, no part of which can long survive alone. The workers seek out nectar to make honey (inadvertently pollinating the flowers); the revered queen is merely a mechanism for the production of eggs, indispensable but not terribly interesting, while the dullard drones exist solely to mate with a virgin queen when she first wings her succulent self into the open air, a romantic notion of love among the clouds which, if successful, results in the drone’s penis and connective tissue being torn from his abdomen after intercourse. No matter: the heart – and the genetic imperative – conquers all.

Honeybees have been part of the American landscape since the early stages of European settlement, an essential part of the newcomers’ economic and cultural baggage. Part of bee ecology is the swarming effect in which overcrowding triggers the queen and 40 to 70 percent of the colony to take off en masse for greener pastures, leaving behind a soon-to-hatch virgin queen, her anxious male courtiers, and the remaining workers. Thus the bees would routinely dispatch pioneering colonies from their congested hives out into the New World wilderness, with swarms often turning up 20 to 50 miles ahead of the advancing European settlers. Indeed, Native Americans some distance from the east coast, having heard of the coming strangers and encountering the presence of the honeybee for the first time, would predict, with prescient gloom, that these “white man’s flies” would soon bring an end to their traditional way of life.

The installation of European agricultural species and methods to North America entailed the wholesale transferal of not only the cattle, chickens, wheat and fruit trees of the homeland, but also the various structures and strategies necessary for the encouragement of these alien life forms to flourish here. Barns were built, fields of row crops and orchards replaced the decimated Eastern forests, and beehives were diligently tended to as they had been at least since the pharaohs languidly sipped mead (fermented honey) while watching their fellaheen toil alongside the Nile. But unlike most other Old World biological importations, such as smallpox, starlings, and snakeheads, the honeybee has been a net gain to the Americas, largely blending in to its new land without displacing native species.

While nature notoriously abhors a vacuum and no ecological opportunity is ever long unexploited, pollination through honeybee foraging has been a boon to America’s plant life. Certain native bees and butterflies might feel a bit crowded by the sheer energy and numbers of the newcomers, but the gentle honeybee is more prey than plunderer, a welcome source of protein for everything from tanagers to toads, spiders to skunks. Bears are infamous for wrecking hives to get at the brood, or larvae (contra Winnie the Pooh, the hive’s honey constitutes only a secondary temptation), while honeybees are prey to all manner of parasites, native and foreign alike. Life in these United States is not always kind to transplants, no matter how long their residence.

A far more lethal threat to the naturalized honeybee is the current epidemic of hive abandonment, a disastrous malady with no end in sight that researchers have dubbed Colony Collapse Disorder (CCD) and which has brought beekeeping to a virtual standstill. Last winter alone, almost half of the remaining hives in the United States were abandoned due to CCD, leaving vulnerable an agricultural industry that relies upon bee pollination for over one hundred valuable crops. Without a resolution the forecast for farming looks decidedly poor.

Investigators believe there are likely several factors at work behind the CCD outbreak, but most now suspect a central player in this unfolding tragedy to be neonicotinoid pesticides, a family of nerve gases related to nicotine that this spring was banned in the European Union. Kim Kaplan of USDA’s Agricultural Research Service states that “At this time, there have been no credible scientific findings relating neonicotinoid pesticides as a direct cause of CCD at ‘real-world’ levels” but that “there may be sub-lethal impacts on honeybees that may contribute to causing CCD.” Neonicotinoids are therefore thought to be only one, albeit perhaps the most pernicious, of a host of maladies presently affecting the honeybee.

According to the USDA-sponsored Report on the National Stakeholders Conference on Honey Bee Health, the parasitic mite Varroa destructor remains the most damaging pest infesting wintering hives, while a bacterial disease with the squirm-inducing moniker of “European foulbrood” is increasingly being found in larvae, a result of weakened immune systems. Malnutrition stemming from a scarcity of diverse foraging habitat increases bee susceptibility to toxins.

And yet evidence that neonicotinoids are a driving force behind the CCD outbreak is difficult to refute: their widespread agricultural application beginning in the mid-2000s is suspiciously parallel to the appearance of CCD. Coincidence? Possibly, but on March 21, 2013, a suit was filed in federal court by a coalition led by the Center for Food Safety against the Environmental Protection Agency (EPA) for failure to preemptively avert the CCD crisis by hustling an untested and essentially unknown pesticide onto the market.

Central to the lawsuit is the EPA’s practice of “conditional registration,” a counterintuitive provision of the Federal Insecticide, Fungicide and Rodenticide Act that allows the EPA to discretionally admit various biocides into the US without having conducted the rigorous scientific analyses that would prove their safety and suitability for use by the public.

Paul Towers is with the Pesticide Action Network, one of the plaintiffs in the EPA suit. He says that conditional registration is at the heart of the issue, whether or not neonicotinoids are solely responsible for CCD. “This loophole expedites commercialization by bypassing meaningful premarket review,” he says. “Since 2000, over two-thirds of pesticide products, including clothianidin and thiamethoxam [both neonicotinoids], have been brought to market as conditional registrations.” By dodging its responsibilities to the public in favor of appeasing the twin juggernauts of Big Pharm and Big Ag, claim the plaintiffs, the EPA has paved the way for any number of harmful chemical compounds to work their way into hives across the country. With over 17,000 pesticide products currently on the market, unforeseen compounds and unplanned exposure is inevitable … particularly when apparent oversights in the federal review structure continue to allow unexamined chemicals free reign over American farm country.

The heavy reliance on chemotherapy by modern American agriculture is suspected in another threat to honeybees. Fungicides play an increasing role in modern farming, and a new study in the scientific journal PLOS | One indicates that these poisons are contributing to CCD by heightening hives’ susceptibility to Nosema ceranae, a unicellular parasitic fungus previously known only in Asian honeybees. And its spores are resistant to hot temperatures: a tailor-made pathogen for our industrialized climate.

Nosema ceranae induces a susceptibility to toxins in bees, and a 2009 study in the journal Environmental Microbiology determined that bees infected with N. ceranae succumb to pesticides at amounts100 times lower than that needed to kill uninfected bees. Given the copious use of pesticides throughout farmland today, it’s difficult to imagine anyplace that is not contaminated with at least a modicum of deadly chemicals, enough, it now seems, to push a hive over the edge.

Indeed, new research from Spain indicates that N. ceranae can sometimes cause the collapse of colonies entirely on its own; when combined with habitat loss and other pervasive stressors – chemical, parasitic, and climatic – even the hardiest hives risk succumbing to CCD, victims of a multipronged onslaught these doughty little animals are simply not equipped to survive.

The honeybee, like the dog and the horse, has a destiny inextricably tied to that of ours, an interactive relationship that spans the history of agriculture and remains one of our most fundamental ties to another species. After thousands of years of cooperative existence, of soothing summer evenings in which farmers everywhere have contentedly observed the humming circuit running its course between flower and hive, hive and flower, the honeybee has arrived at the end of its capacity to serve us. We have abruptly breached a generous contract after centuries of faithful performance, and across the world the fields are falling silent.