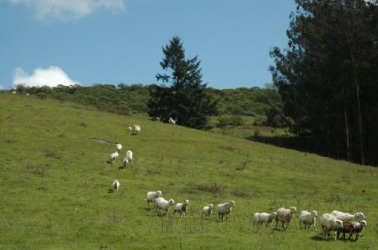 Room Enough for All
~
How Farmland Preservation Can Help
Wildlife Thrive

First published in the May 2012 issue of Virginia Wildlife magazine
"Those who labour in the earth are the chosen people of God, if ever he had a chosen people, whose breasts he has made his peculiar deposit for substantial and genuine virtue. It is the focus in which he keeps alive that sacred fire, which otherwise might escape from the face of the earth.”
~ Thomas Jefferson, Notes on the State of Virginia (1781)

Virginia’s pastoral landscape and farming heritage has been celebrated for over four hundred years, but the eventual triumph of agriculture in the New World was not always a sure thing. Indeed, it seemed doomed from the start.

The corporate-financed entrepreneurs, roustabouts and gentlemen of leisure who in May of 1606 waded ashore at what would become Jamestown were hardly versed in the intricacies of coaxing a living from the soil, and particularly not the pestilential swamplands of the lower James River. The island chosen as a defensible settlement had marshy soils and brackish water and, tellingly, was uninhabited by the local Powhatan peoples, who had thoroughly settled much of the surrounding region’s higher ground with small farm plots.

As bearers of exotic metal tools, glassware and fabrics, the Europeans were welcomed by the Powhatan with prolific feasts and entertainments; their wily leader, Wahunsenacawh, had plans to utilize the foreigners’ superior technologies in his ongoing power struggles against neighboring Algonquin tribes. Baskets of precious maize, freely given to the colonists, were heaped up in makeshift granaries, fresh meat and fish were abundantly shared, and overcrowded England seemed comfortably far away.

All looked promising to the settlers as the planting season gave way to late summer, but the thought apparently never occurred to these foolhardy urbanites that the free food they enjoyed – the result of others’ hard work in field and forest – was not a permanent tribute but rather a calculated, short-term diplomatic offering. When stores began to run low, the English simply took what they desired from surrounding Powhatan villages and farms, leading in due time to violent resistance and a brief war that was to end only with the capture in 1613 of Powhatan’s daughter, the celebrated peacemaker Pocahontas.

The days turned colder and the bleak reality of their situation became apparent to even the most fervent among them. Malnutrition weakened immune systems unaccustomed to American pathogens and the primitive settlement’s burying grounds began to fill. The settlers had been unwilling to learn local methods of growing food in the meager soil they’d claimed for themselves and now it was too late. Some had recourse to cannibalism. One by one they expired, in the worst of circumstances, until in the spring of 1610 reinforcements from England found only 50 of the original 600 colonists still living, the survivors later recalling that dreadful winter as “the starving time.”

A complete lack of preparation for the foreseeable challenges that would face them coupled with a short-sighted belligerence that tragically alienated their only source of sustenance conspired to nearly wipe out the colony before it could become established, but it was the absence of a working knowledge of agriculture, the only means by which the newcomers could have achieved a sustainable independence, that most nearly doomed the expedition. Not until support arrived from England that summer did Jamestown again become viable, and with the introduction of new strains of exportable tobacco that took readily to the colony’s reinstituted farmland the European presence in North America became assured.

Today its remaining farms and forestlands still play an essential role in how Virginia sees itself. Agriculture provides a substantial percentage of the Commonwealth’s economic output: in a recent study by the University of Virginia, farming and forestry-related industries contributed almost $79 billion to the state’s economy in 2006 and provided 501,500 jobs. According to the state Department of Environmental Quality, farms cover twenty-four percent of Virginia’s total land area, while an impressive sixty-five percent of the state remains forested with roughly eighty-five percent of Virginia’s forestland under private ownership. It is therefore the farmer and the private forest owner that together control the future of both Virginia’s wildlife habitat and the Commonwealth’s storied agricultural tradition.

In today’s perilous economic climate many rural landowners are seeking an affordable way to retain their open spaces. Residential and commercial development is gobbling up farms and eradicating isolated pockets of woodland while larger forested tracts are being broken up by roads and suburbs. The agricultural and timber industries stand to permanently lose thousands of productive acres to land conversion, while the ecological integrity of our remaining farms and forests is of crucial concern to the health of the state’s wildlife.

Fortunately for all of us – wildlife included – Virginians looking to protect their farmland, forests and other open spaces have a proven method that rewards landowners who choose to keep their property intact and undeveloped. Generous tax incentives are available to those wishing to permanently protect their land from inappropriate development with a conservation easement.

By voluntarily donating easements, landowners permanently relinquish the right to intensively develop their property in order to protect conservation values such as agriculture, forestry, and wildlife habitat. “We’re pleased to work with localities interested in preserving their working farm and forestland,” says Kevin Schmidt, Office of Farmland Preservation coordinator at the Virginia Department of Agriculture and Consumer Services. “In addition to the economic benefits associated with agricultural and forestry use, these farms and forests provide important wildlife habitat, open space and other conservation values to communities across Virginia.”

Tim Brown farms corn and soybeans on 637 acres in Accomack County. Several years ago Brown, an avid wildlife observer and duck hunter, took advantage of a cost-share program from Ducks Unlimited to install dams and dikes on his property in order to seasonally flood 30 acres of marginal farmland to attract waterfowl. Today the farm plays seasonal host to numerous species of duck, as well as wading birds like egrets and ibises, migratory shorebirds, and raptors.

The Eastern Shore is known for its marshy landscapes and while the soil is often fertile some areas drain poorly, which can result in lost crops after heavy rains. This however was an ideal situation for a farmer-conservationist like Brown, who simply targeted those areas of standing water and perennial flooding for wetlands restoration. “I get a great deal of personal pleasure from the habitat management steps we’ve taken here,” says Brown, “and I’ll go out and watch the ducks come in at dusk two or three times a week. The wetlands are like a sanctuary to me as well as the birds.”

By leveraging funds from both public and private sources via DU’s cost-share strategy and the USDA’s Conservation Reserve Program, Brown has partially recouped the financial loss of thirty acres of (albeit marginal) cropland. A further cost-saver was his decision to place the property under a conservation easement held jointly by DU and the Virginia Eastern Shore Land Trust, which provided state and federal income tax benefits.

Tim Brown’s contribution to the coast’s wildlife doesn’t stop with his waterfowl impoundments. Warm-season native grasses planted along the borders of his fields attract quail and filter water headed for the adjacent Chesapeake Bay of fertilizers that cause harmful algal blooms, and his ongoing wetlands restoration benefits everything from blue crabs to bald eagles. Careful planning and the advice of experts have allowed Brown to integrate profitable farming with his love of wildlife – income for the soul.

At the other end of the state, Eric Shobe and his family own a cattle-and-timber farm near Goshen in western Rockbridge County composed of 500 acres of upland pasture and 1,000 acres of mixed hardwood forest. Waterways flowing into the Little Calfpasture River are home to rare native brook trout. Deer, wild turkey and bear are plentiful, and ruffed grouse, a scarce species in many parts of its native range, are being encouraged with clearings planted with apple and pear trees.

The property was largely a climax forest when he acquired it, Shobe says, and was heavily overpopulated with deer, whose foraging appetites were observable in a stark “browse line” of about five feet from the ground, beneath which no undergrowth of leafy branch was left uneaten. Active management began by thinning the deer with aggressive hunting, which gave the forest floor a chance to recover some greenery.

More intensive steps were needed, so Shobe called in the Virginia Forestry & Wildlife Group, a land management service based in Afton that provides a palette of options for landowners seeking to enhance their properties’ habitat quality. The company’s Brian Morse, a wildlife biologist, assessed Shobe’s farm and instigated a number of landscape improvements, including controlled burns, small clear-cuts, and food plots. Even American chestnut trees, wiped out decades ago by an alien blight, are being reintroduced as saplings to their former habitat after years of careful selective breeding.

“Too often it seems like it’s one or the other,” Shobe says about farming and habitat retention. “We’ve struck a nice balance here raising cattle and wildlife, and I think what we’ve done has benefited both.” Happily for Eric Shobe and his neighbors these benefits will continue in perpetuity, as the Shobe farm is protected by a conservation easement held by the Virginia Outdoors Foundation.

Today a rapidly changing Commonwealth faces an escalating destruction of its agricultural heritage, but innovative farmers and foresters are incorporating habitat protection and enhancement into their land use plans to retain an important component of their properties. Whether you hunt and fish yourself, you’re interested in leasing these rights out to others, or you simply find solace in the rejuvenating effects of observing wildlife for its own sake, making positive contributions to the wildlife habitat on your farm will have real and lasting benefits to yourself and your legacy.
Powered by