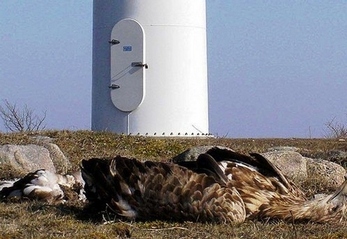 Birds, Blades, and the Brutal Business of Clean Energy


First published 1.9.14 in Quest: The Science of Sustainability
Migrating annually from northeast Canada down the spine of the Southern Appalachians is a very small and genetically unique subpopulation of golden eagles (Aquila chrysaetos). These raptors are generally thought to inhabit the arid mesas and icy buttes of the American West, but a few thousand spend their winters in upland forests and pastures far to the east. It’s here that these great birds are now facing a formidable and unexpected foe: wind energy.

During their continental migration golden eagles must conserve as much energy as possible. They accomplish this by spending less time hunting and more time gliding, using geographic features like mountain ridges to capture updrafts that buoy them along their way. But eagles are not the only ones seeking to exploit these thermal patterns: wind turbines are often placed along the same breezy ridges that migratory birds and bats depend upon. The result is that wildlife and wind turbines increasingly occupy the same flight path, and that’s bad news for the birds, which can fall victim to the turbines’ 120-foot blades.

In November, 2013 the Department of Justice successfully prosecuted Duke Energy under the Migratory Bird Treaty Act for the killing of 14 golden eagles at a wind farm in Wyoming. Conveniently for energy corporations like Duke – and less so for eagles – in December, 2013 the Obama Administration finalized a rule allowing the incidental “take” of golden and bald eagles by wind farms over a 30-year period of operation, a decision which flies in the face of federal law and drastically heightens the likelihood of further eagle mortality.

And wind turbines are not the only danger Appalachian golden eagles face during their southern sojourn. Much of the birds’ winter nourishment comes from winterkilled deer that have expired over the long frozen nights. But some of these initial deaths come from animals wounded during the region’s popular deer season, and it is this food source that unfortunately poses an additional and insidious threat to the eagles.

When a lead rifle bullet strikes an animal it fragments into many pieces, sending shrapnel tearing through the target’s organs and soft tissues. This amplifies the weapon’s killing power but leaves a deadly legacy for scavengers feeding on the carcass. Whether from gut piles left behind from field-dressing successful kills or from animals that were wounded and died unclaimed, lead bullet fragments left in the wild will likely be consumed by something: a bear, a fox, an eagle – nature rarely lets nourishment go to waste. Birds are particularly susceptible to the toxic effects of lead, and as a hunter who has viewed the slow, agonized death of a poisoned eagle, I urge others to think twice about using lead ammunition when alternatives such as copper are widely available.

(See this Quest story about California’s efforts to protect the California condor from the dangers posed by lead ammunition.)

California’s recent ban on lead hunting ammunition isn’t likely to be duplicated in West Virginia any time soon, but a little care in the placement of wind turbines would be a much more realistic starting point for the long-term protection of these eagles. With climate change manifesting itself more clearly with each passing season, wind energy is making an important contribution toward a more sustainable, clean-burning future. But every technology has its tradeoffs, and quite a long shadow can fall between the idea and the reality – especially when it’s cast by a row of 330-foot tall rotating turbines.

The biologists and policymakers with whom I spoke while reporting this article agree that for renewable energy to be truly sustainable over the long term, it must be undertaken in such a way as to minimize the harmful impacts it can have on the natural environment it’s meant to champion. Renewables are certainly better than fossil fuels, but they are still a form of industry that requires oversight and regulation.

The Obama Administration’s decision to excuse turbines from statutes that protect eagles from other manmade dangers runs counter to legal precedent. Without fear of penalty, there is little reason to expect the wind energy corporations to deliberately site new turbines in areas removed from eagle migratory routes.

The broken bodies of these magnificent eagles sprawled beneath the massive revolving blades are the preventable casualties of a new gold rush for federal incentives supporting clean energy, another obstacle on the long slow road to a sustainable future.