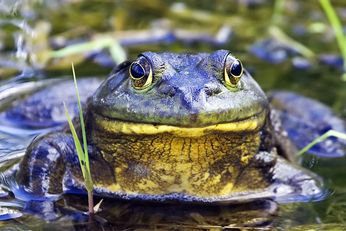 Some Reflections on Frog Hunting

First published in the May/June 2014 edition of Virginia Wildlife magazine
The closing days of a Southern summer bring with them impressions little known to the rest of the year. In the countryside, premonitions of the great autumnal mortality are everywhere. There is a slack feeling of imminence, of waiting. Drained of the spring’s vitality the papery oak leaves hang bug-riddled and limp in the soft dusty stillness of evening. Heat lightening flickers silently, like a distant bombardment, over yonder hills, while bullbats hunting insects plunge with a dull groan through the thick evening air. Later, over the chirring invertebrate choruses of starry night, from weedy ponds and creek banks rises the deep, melancholic clanking of the bullfrog.

I was exposed early on to the unique ritual and sodden sport of frog hunting, or “froggin’” as it was known locally. Some people frog hunted with .22 rifles, a few even with .410 shotguns, but my friends and I generally used an old-fashioned 3-prong gig made of tin set at the end of a 9-foot length of sturdy dried cane pole. We took it seriously, and we were damned good at it.

Typically we would have a few ponds lined up for the evening’s work that had been agreed upon by the landowners, mainly farmers who were dental patients of my father and happy to oblige. (“How much will this bridge set me back, doc?” “Well, let’s talk about that … your farm’s got a lot of ponds, doesn’t it?”) Rumbling up a gravel driveway we’d switch off the engine and sit there, sweating and silent, listening to the crickets, the tree frogs, and the gnawing grinding buzzing churn of the cicada, awaiting our aural bearings.

Eventually we could discern in the dim fields around us the unmistakable croak of our quarry. Climbing out of the mud-spattered truck, empty cans rattling irrefutably on the gravel, we blinded ourselves with bug spray, made a truce with any farm dog on duty, and stumbled off into the gloaming.

Crickets whirr and misty moonshine silhouettes the beef cattle that crowd around us, dully interested in these unexpected nocturnal visitors. Stunted cedar saplings have colonized the overgrazed pasture, easy to trip over. The pond is approached, wreathed in fog, and the chosen killer slithers into black water that feels like blood. Methane bubbles rise in clouds from the benthic foundation of manure and mud as I ease my way in to the knees, the hips, the chest. We disdained using waders, preferring to get in all the way up to the neck, like heroes - I part the thick viscous bug-jumping scum of algae and duckweed with my chin.

The trick with frogging was to minimize the disturbance of the approach. The quarry was hunkered down at the water’s edge, hidden by overhanging weeds with only the eyes and tops of the head exposed. The fescue and orchard grass overhanging the water provided the frogs with cover and good feeding but made a landward attack difficult, so we opted for a more aquatic technique, coming at them from their own element, eye to eye. Besides, and I think we somehow realized this even then, full assimilation into the prey’s milieu seemed not only more sportsmanlike but also more … aesthetically pleasing.

Immersed in the steaming water and surrounded by plentiful mosquitoes, moths and lacewings, the male bullfrogs, aggregated in competitive hierarchical groups called choruses, were concerned entirely with their rivals. But at the first entry of a heavy human body into their environment the voices immediately went silent. The inevitable ripples and a slightly elevated water level triggered a mild defensive reaction: shut up, sit tight, wait it out. For a stealthy hunter this response was greatly preferred to the alarums occasioned by a clumsy entry, when with a series of abrupt churking grunts the pond’s entire web-footed population would leap for deep water, sometimes bouncing clumsily across the surface for three or four feet before diving. Those were the times, among my hunting partners and I, when the recriminations would begin.

In the earlier stages of this evolving routine one of us had circumnavigated the pond’s edge, trying to spotlight frogs (and highlight lurking moccasins) while the other would do all the gigging from within the pond. Eventually this technique was discontinued when we realized that an orbiting spotlight was only spooking the prey, and all duties devolved to the one man in the water, supplemented on flashlight by a stationary spotter. This arrangement also seemed to make the experience more authentic for the hunter, solely charged as he was with all the moral weight and vicarious expectation. By his skill alone would the weight of the night’s game bag be determined.

As a seasoned veteran I could usually manage to integrate myself into the water with adequate craftiness and the frogs – save for the sneaky buggers who had doubtless submerged and pushed serenely away from shore unbeknownst to me – remained in situ. When a good sized one was spotted, I would ease up to him with infinite patience, arms akimbo, the gig held cocked over my right shoulder like an assegai, a waterproof flashlight in my left fist training the beam as steadily as possible into those protruding amber eyes. Dazzled and dumbstruck, the frog would generally hold his ground until the gig could be levered, aimed and thrust, preferably under the chin if at water level or behind the tympani (external eardrums) and into the fused neck vertebrae if stabbing from above. The stricken animal, bucking and wriggling, I’d ground tight into the muck by leaning on the gig until I could wedge the flashlight between my knees and dig my free hand into the sludge beneath the frog’s body, grab the exposed tines from the underside, and raise the entire writhing, muddy mess into the air. I jerked the animal from the barbs and stuffed it, still silently struggling, into the mesh nylon bag hanging from my shoulder.

This process was repeated until a full circuit of the pond had been made, and if many frogs had been spooked into the water during the first round we would wait about fifteen minutes, nauseously chewing tobacco, until they had time to resurface, then we’d hit them again. We consciously tried to leave enough alive so as to provide breeding stock for the next year, and I was always glad to hear the reassuring (and I hoped, perhaps, forgiving) song of the survivors starting up again behind our backs.

In the dim light of early morning, after we’d reached our limit or tried to, we would pull the truck over somewhere and haul the filthy sloshing cooler of melted ice and stupefied frogs into the middle of a field, far back from the road. One by one the casualties were withdrawn from the gruesome melt, held by the slick hind legs, and whacked hard and headfirst against a cutting board placed atop the cooler. Satisfied the victim was dead I’d take my tobacco knife – a lightweight hatchet used for chopping burley – and hack at the waistline until the fat rear legs, the objects of the hunt, parted from the torso. Conveniently joined at the hip, the detached legs were placed on the cutting board and the long-toed feet chopped off, then the mottled gray-green skin was tugged loose with pliers and yanked from the shorn ankles with a single jerk. The shiny pale drumsticks we popped into a somewhat cleaner cooler of ice. I can still recall, after a successful hunt, the morning summer sun gaining in height and heat as we bent to our sticky work in some roadside pasture, flies and wasps buzzing over our arms and settling thickly upon the discarded upper bodies, the scattered guts, and the ancient amphibian blood.

With such inspiring toil we would employ many a summer weekend over our jocund carefree youthful years, alternating frogging with bass fishing, binge drinking, fumbling attempts at romance and desultory employment. But today the passion among Southern countrymen for the murky art of frog hunting is declining. Gourmands of the exotic are nowadays more likely to buy frozen packages of dreary farm-raised legs from Indochina at the local Wal-Mart than don the traditional headlamp and jungle boots of yore, while the eternal video screen clutches a fast-growing captive audience of kids in its digital grip. Yet even were frogging still a popular means of game provision, depressing environmental matters have closed in that threaten to reduce the sport to a poor vestige of its former glory.

A diabolical host of environmental factors is today causing a global meltdown of Class Amphibia (frogs, toads, newts, salamanders, and the bizarre caecilians). According to the International Union for the Conservation of Nature’s Red List, for half a century the definitive source for assessing the conservation status of plants and animals, nearly one-third of the planet’s amphibian species is threatened with extinction or already lost, at least 42 percent are declining, around 500 species are so far gone that only captive rearing of the scattered survivors (funded by whom?) can save them, and while habitat loss remains the primary villain newer and more insidious evils are increasingly taking their toll.

A porous ozone layer resulting from an exponential increase of greenhouse gas emissions is admitting ultraviolet light in heightened concentrations, and amphibian eggs lying exposed in the magnifying medium of fresh water are irradiated to such an extent that the embryos are sometimes destroyed, broiled by undiluted solar radiation. Grotesque mutations in frogs – extra or missing limbs – have been discovered in rural lakes and ponds around the country, the resulting terata now attributed to runoff fertilizers and pesticides widely used in agriculture which heighten frogs’ susceptibility to infection by the deforming Ribeiroia flatworm. Fungal diseases like chytridiomytosis, often introduced by human activity, have further devastated weakened populations. Meanwhile wetlands are being drained, riverbanks eroded, and farm ponds are vanishing beneath strip malls and subdivisions. Pollution, acid rain, predation and competition from exotic species – the odds against these little thin-skinned creatures are stacking up higher and higher.

It is apparent that the amphibians, whose dualistic lifecycle offers us a kind of spiritual analogy, are in the midst of an existential crisis, one for which we are abundantly to blame. We simply must reign in our destruction of wetland landscapes, our mania for spraying ever more deadly toxins on our crops, our unrelenting dumping of industrial chemicals into our air and water, or the mystic pulsing thrum of the bullfrog will like much else become an echo from an irretrievable past.