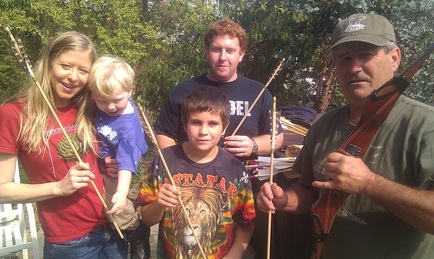 A Master Archer Channels the Past

First published in the November/December 2014 issue of Virginia Wildlife magazine
His Majesty’s speech had not been particularly encouraging. As he pounded in the last of his palings at the prescribed angle to dissuade charging cavalry and commenced to whittle a sharpened point with his knife, Geoffrey wondered again what precisely he had to gain by dying for another man’s right to lord it over these haughty Frenchmen. The King’s rallying tirade, what little he could make of it what with having to immediately translate the words into Welsh for his provincial comrades, had gone on at length to justify the coming slaughter as a necessity to redeem the Lancastrian honor, and to permanently extend England’s power across the Channel. Geoffrey tightened the uncomfortable straps bounding his pavise—the large convex shield he would crouch behind when reloading—to his back, straightened his heavy quilted doublet, and pulled thoughtfully at his hempen bowstring. The nobility, faceless and aloof in their lavish plate mail, were sure be safely ransomed if captured, but the price of defeat for commoners like himself was likely execution, or at least mutilation; such was the French contempt for British bowmen, the King had helpfully noted in closing, that they had pledged to chop the fingers from every captured archer’s right hand, thus destroying their martial capacity forever.

The drums and horns of both armies were increasing in frenzy and volume, heralding the imminent arrival of battle. Geoffrey selected his lucky arrow, made, like his yew longbow, by his father decades ago and fitted with an iron bodkin tip whose heavy angular spike was designed to pierce armor. A command was given and 5,000 English and Welsh archers on either flank of the main army bent their bows. Geoffrey held his notched arrow with his right fist pulled back to his cheek and put all his weight into pushing the bow out with his left hand, a technique he’d been practicing since childhood when his father led him on nocturnal poaching expeditions onto the lord’s hunting preserve for protein replenishment. The 120-pound draw weight of the six-foot bow would send the first volley well into the French front lines, now forming ranks in the churning mud 300 yards to the north. Geoffrey took a long, deep breath, let it halfway out, and awaited the signal to release…

The Battle of Agincourt took place in northern France on October 25, 1415. It was a decisive victory for England in the Anglo-French Hundred Years War (1337-1453) and was most remarked upon at the time for the indispensable role played by the British longbows. Wielded by poor conscripts and deployed with devastating effect upon the French knighthood, the battle was a humiliating reversal of the feudal notion that vassals were inherently inferior to their lords.

In 1545 an English carrack called the Mary Rose was sunk north of the Isle of Wight while repelling a French invasion fleet during the Battle of the Solent. 430 years later she was raised and among the treasures gleaned from her wreckage were numerous top-grade longbows in excellent condition. Replicas made to the material and dimensional specifications of the originals had draw forces of between 100 and 185 pounds of force, a tremendously powerful weapon that would have taken years to master and a lifetime of hard work to maintain the upper-body strength necessary to effectively employ (the average longbow today has a draw weight of around 60 pounds).

Agincourt is thought to mark a psychological turning point in medieval conflict in which homegrown peasant levies annihilated the cream of continental chivalry with weapons and techniques that had been handed down for generations, but a similarly jarring outcome had occurred 29 years previously when a halberd-swinging army of the Swiss Confederation crushed an imperial Austrian force and procured that crankily isolated country’s freedom from Habsburg tyranny. Some of the same sense of insular independence, along with a love for living history and its legacy to the future, animates a traditional archer in Rockbridge County of Swiss-German descent named Olin Bare, whose expertise with a longbow (as well as with banjos and fiddles) has made him widely respected for his painstaking attention to and appreciation for the careful transmission of the past.

A Master Archer with the Folklife Program of the Virginia Foundation for the Humanities, Olin is also on the professional staff of Bear Archery, a renowned bowhunting company founded by Olin’s idol, Fred Bear. His great-great-grandfather rode in the 1st Virginia Cavalry with JEB Stuart, and Olin remains active not only in commemorative Civil War activities but also regularly participates in the supreme madness of the Society for Creative Anachronism, a medieval recreationist organization that holds massive outdoor rallies each summer in which jousting, armored swordfights, blacksmithing, and similarly colorful activities are eagerly participated in, and where Olin serves as a Combat Archer during intense battles that are said to evoke the chaos, terror and triumph of medieval warfare.

Olin relishes these experiential excesses for the same reason he favors traditional archery over compound bows—the ties to our ancestral past must be keep vibrant, and he is dedicated to educating people, particularly the pixel-enchanted young, about the proper way to conduct oneself on the archery range and in the woods. The venerable “stick and string” archers look down upon the elaborate synthetic compound bows with their laser sights, wheels and pulleys, and mechanical releases as inauthentic and somehow dishonorable, much as some fly-fishermen view spinning rods. For the traditional archer only a longbow or recurve will do, and there is only the eye, the arms and the target between victory and failure.

This “deep mental concentration,” as Olin calls it, an absolute interconnection between wood, string, mind and flesh, evokes the essence of the longbow’s legacy: a direct interface between hunter and hunted, transmitted along a flat trajectory like a hissing projection of one’s willpower that, if the brain and body are sufficiently aligned, can result in a bounty of, in Olin’s case, deer, turkey or bear, all successfully bowhunted on his 50-acre farm near House Mountain.

A deep reader of history, Olin claims that archery is among the three more significant technological developments in early human antiquity, along with the wheel and the making of fire. Bows allowed Paleolithic man to confront human aggressors and dangerous game like mammoths and aurochs (extinct giant oxen) from a relatively safe distance, eliminating the risk of crippling injury during hand-to-hand battle. And indeed 7,000-year-old pictographs from a small cave in Catalonia near the town of Vilafranca, just discovered last spring, naturalistically depict an archer clutching a fistful of arrows and aiming at an auroch, perhaps as an invocation of sympathetic magic meant to heighten a clan’s success afield.

With vibrant hair like Beethoven’s, the narrowing eyes of a born skeptic, a vocabulary rich in colorful anachronisms, and an incontestable attraction to anything that promises rigor or controversy, Olin’s extravagant love for a life on history’s edge proves that even in our inescapably interconnected, virtually synthetic post-postmodern globalized culture, there is still room for those who insist on living in terms of the past. Olin Bare’s rigorous devotion to the ways of his distant ancestors evokes admiration from friends and students alike, who come away inspired by the skill and tenacity necessary for his approach to life. By insisting that the old days are still vibrant and lucid, he effectively invokes Faulkner’s famous line from Requiem for a Nun: “The past is never dead. It’s not even past.”