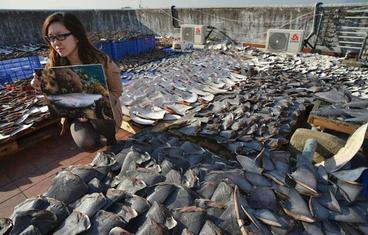 First published in the May 2011 issue of Virginia Wildlife magazine
Put yourself in his place, my Child,
Could you keep Spotless, Undefiled?

Hunger. You have rarely known a moment free from its terrible grip, lashing you ever onward in search of sustenance. Since your live birth almost 20 years ago at the great nursery grounds in the southern Chesapeake Bay you have hunted the Atlantic coast of North America from New England to Mexico, feeding on benthic fishes, smaller sharks and dogfish, rays and crustaceans. You are neatly 6 feet long, weigh 110 pounds, have the darkened anterior and lighter belly of most sea animals, and are possessed of the sinewy strength, hydrodynamic frame and unappeasable appetite of your kin.

This evening in late summer you are patiently cruising the seafloor, snapping up what blue crabs you can find as you hunt the sloughs between sandbars. Your elliptical eyes are able to see easily in the turbid waters near shore due to the crystal mirrors, called tapetum lucidum, behind your retinas which amplify light passing through the lenses by bouncing it back again to the photoreceptors. Your great dorsal fin occasionally breaks the surface in this shallow area but you concentrate on the sandy bottom as you search for your preferred prey. You surprise an Atlantic guitarfish as it is rooting for clams, but it kicks up a spray of sandy muck as it flees and your bite goes wide. Calmly you resume the hunt, tirelessly undulating the powerful muscles of your tail and caudal fins as you move closer to the sound of breaking surf.

The hunting in the great bay is not what it was and most prey species are getting harder to locate. You breathe in the familiar stench of the chemicals that poison your world: polycyclic aromatic hydrocarbons, the result of burning fossil fuels washed off coastal parking lots and streets; organophosphate and organochlorine pesticides from upriver farms, some as far away as the Shenandoah Valley where your ancestors swam in a sea that evaporated eons ago. Having consumed fish and shellfish in the mercury and arsenic-rich soup that has become your habitat, your liver is bloated with 20 years of toxic metal bioaccumulation. Your very success as a hunter is slowly killing you.

The legal limit for consumption of methyl-mercury, set by the United States Environmental Protection Agency, is 0.1 microgram per kilogram of body weight. Studies have shown shark meat contains as much as 1,400 micrograms of methyl-mercury in one kilogram.

An array of electrical sensors—the ampullae of Lorenzini—are clustered about your flattened snout, tiny mucous-filled pits that can receive the vague bioelectrical impulses emitted by all living things, allowing you to successfully hunt on cloudy nights by zeroing in on bioelectrical signatures. Suddenly you register a new electrical field and move into shallower water to investigate. A school of cownose rays, a species whose numbers in the Chesapeake Bay have exploded in your lifetime, is slowly flying through the turbid water along the shore. With a stiff flick of your tail you suddenly change course and accelerate into their midst. They flush in all directions, but your speed is no match for theirs and soon you are champing through leathery wings and bolting down great gobs of meat. The sandbar shark snaps up the last ragged scraps and heads for deeper water, vigilant, relentless. Hungry.

It is estimated that cownose rays in the Chesapeake Bay consume 840,000 metric tons of shellfish during their roughly 100-day occupancy—the 2003 Virginia oyster harvest was only 300 metric tons. However, attempts to address shellfish loss through the marketing of these animals as table fare is ill-conceived: according to the Virginia Institute for Marine Science, these rays are slow-maturing fish, with females not reproducing until they are 7 or 8 years old and birthing just one live pup per year. Far more logical to protect the natal grounds of the sharks that are the rays’ chief predators and restore the ecological imbalance caused by overfishing.

Fishes are the world’s most widespread branch of vertebrate animals, with over 25,000 species extant today. Elasmobranch fishes, those with skeletal systems composed chiefly of flexible cartilage rather than bone, include sharks, rays, and skates, and number around 800 species worldwide. The shark lineage (Order Selachii, Family Pleurotremata) dates back 400 million years, to the Paleozoic (“old life”) Era when the first jawed fishes were evolving, prior to dinosaurs, trees, and even insects. So successful was the selachian design that was forced to change little as the slow eons passed, its incredible senses, devastating power and generalist appetite combining to form the perfect marine predator.

Selachian anatomy is geared toward the single purpose of oceanic hunting. The cartilaginous skeleton allows for tremendous flexibility while reducing body mass. Even the heavy jaws, vertebrae and some areas of the skull lack true bone but are simply cartilage that has been strengthened by calcification. Shaped like jet fighters or torpedoes, the sharks’ tapered form maximizes the flow of water as it swims, while its prominent fins provide superb stability and stamina. Unique sub-dermal connective tissues move the entire body’s strength toward the tail, which with a few stiff lateral movements can propel the shark in bursts of amazing speed, up to 22 miles per hour for the powerful mako.

A shark’s skin is layered with denticles, tiny tooth-like scales that reduce drag while providing the animals with a kind of spiky armor. The formable jaws are specifically formed for seizing and slicing into prey. The upper jaw is loosely attached to the skull by ligaments which allow it to detach, protrude, and gape wide to engulf smaller fishes as well as to grasp and tear flesh from the bodies of larger animals.

The teeth vary in size and shape according to the prey base of the species, with fish eaters having more pointed, backwards-facing teeth and mammal hunters or generalists having the familiar triangular shape. Both types are regularly replaced by the rows of growing teeth set further back in the jaws.

Sharks are some of the very few animals left on Earth that retain the capacity to kill and consume human beings, but the threat they present us—despite the tragic reality of the occasional attack—is so rare as to be statistically insignificant: an individual is three times more likely to be hit by lightning than to be bitten by a shark. There were an average of 32 shark attacks per year in U.S. waters between 1990 and 2004. Of the 490 attacks during this 15-year span, 11 were fatal. According to the International Shark Attack File (ISAF) one’s odds of being bitten by a shark are 1 in 11.5 million; your likelihood of being killed are 0 in 264.1 million, nearly impossible. You’d have much better odds of winning the lottery than of being killed by sharks, and even the rise of shark attacks over the past several years can be demonstrably traced to the concurrent increase in human populations and interest in marine activities.

Last year the ISAF investigated 115 alleged incidents of shark-human interaction occurring worldwide. Upon review, 79 of these incidents represented confirmed cases of unprovoked shark attack on humans, “unprovoked attacks” being defined as incidents where an attack on a live human by a shark occurs in its natural habitat without human provocation. That’s 79 substantiated shark attacks, hardly a percentage of the general population sufficient to elicit much angst. These calming scientific pronouncements somehow fail to elicit the fascination and wonder evoked by the spectacle of bloody death in the sea foam, yet when viewed dispassionately, as all credible science-based policymaking must be accomplished, the world’s selachians are in far greater danger than are beachgoers.

According to the College of William & Mary’s Virginia Institute of Marine Science, the shark species most typically found off Virginia’s coasts include sandbar sharks, smooth dogfish, Atlantic sharpnose sharks, spinner sharks, and to a lesser degree scalloped and smooth hammerheads, tiger, sandtiger, blacktip, bull, and dusky sharks. Each of these creatures has followed its own path through the unpitying fields of time and have winnowed out their competitors through the supreme balance of evolutionary give and take. Yet their numbers are falling every day as millions are mutilated and left to starve on the seafloor to supply an inane “delicacy” while their breeding grounds are contaminated and destroyed.

Off the Virginia coast, scalloped hammerhead and tiger sharks may have declined by more than 97 percent from sustainable populations; bull, dusky, and smooth hammerhead sharks by more than 99 percent. The valuable ecological role played by these sharks as large predators has effectively been extinguished.

The greatest threat to sharks today is overfishing, as the insatiable gullet of a newly wealthy China sucks the seas clean to feed its lust for shark-fin soup and “traditional medicines.” Combine this with pollution, coastal development, diseases, and an implacable fear and hatred of sharks and it’s easy to see why these marvelous animals are being annihilated. As I write this, a shark conservation plan proposed by the United Nations and backed by the U.S. was defeated by a cabal of industrial fishing interests including China, Japan, Russia, and many of their Third World followers, opening the way for continued despoliation of shark populations and the inevitable extinction of endangered representatives of these slow-breeding creatures. Cynical pleas for the economies of poor coastal countries, along with the myopic denial of scientific findings buttressed by an instinctive lack of sympathy for sharks, have combined to crush even the most basic of protective strategies, thereby consigning millions more sharks to an agonizing death.

Looking out over the seemingly boundless sea, people have for thousands of years been drawn toward thoughts of the eternal and infinite, even though our visual range is limited to about 12 miles due to the curvature of the earth. But what has become demonstrably clear is that the oceans are hardly unlimited, that through overfishing, climate change, and the acidification and carbonization of seawater resulting from our maniacal burning of fossil fuels, the state of the marine world is dire indeed, from dying coral reefs and “dead zones” to vanishing phytoplankton and the annihilation of entire genera of large animals.

The oceans are finite, fading, and rapidly being emptied of their most magnificent denizens. We needn’t declare open war on sharks to ensure their demise and the catastrophic repercussions it would have on the world’s oceans; we can merely sit back, do nothing, and let our chief motivators—greed and inertia—do the work for us. Sharks are central to the health of our oceanic ecosystems, and their loss is triggering immense changes around the globe. Only by conquering our superstitions and avarice can these great animals continue a journey that has been hundreds of millions of years in the making.

In a world older and more complete than ours they move more finished and complete, gifted with extensions of senses we have lost or never attained, living by voices we shall never hear.