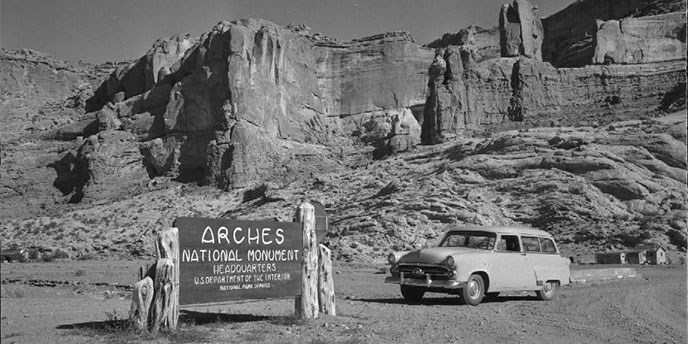 This book served to usher in the modern environmental movement in its radical, libertarian, deep-ecological form, but to be honest it is so unique and personal a work as to be—at least for myself—almost impossible to review objectively. But we’ll give it a go.

Abbey’s record of three seasons spent as the sole ranger of Arches National Monument in the canyonlands of southeastern Utah is a glorious statement in support of the unfouled, unaltered, unmolested earth, free of anthropogenic “improvements” like asphalt, flush toilets, nuclear reactors and concession stands.  Desert Solitaire introduces radical ideas for the improvement of the American wilderness system such as banning automobiles and road building from national parks, ideas now being actively considered for overcrowded parking lots like Yosemite.  Or were being considered, prior to the current administration.

But it is on Abbey’s perennial philosophizing that I wish to concentrate in this brief review.  Thinking of God, life, death and immortality, Abbey takes on the messianic robes of the desert gurus of yore while displaying a purely human love of life as it is “in the here and now.”

“Nothing moves but the heat waves, rising from the naked rock.  It is somehow comforting to see, nearby, the yuccas growing from the sand and from joints in the stone.  They are in full bloom today, clusters of waxy, creamy flowers on tall stalks, supported and nourished by the rosettes of daggerlike leaves that form the base of the plant.  God?  I think, quibbling with Balzac; in [Abbey’s friend] Newcomb’s terms, who the hell is He?  There is nothing here, at the moment, but me and the desert.  And that’s the truth.  Why confuse the issue by dragging in a superfluous entity?  Occam’s razor.  Beyond atheism, nontheism.  I am not an atheist but an earthiest.  Be true to the earth.”

Desert Solitaire is the first lengthy distillation of Abbey’s admirably conservative philosophy, grounded as it is in anarchism, nominalism and a pervasive concern for ecological health and wilderness preservation.  Abbey feels that without open space and untamed landscapes to try our nerve and test our merit humanity will become weak, indolent and ultimately the slave of the labor-saving technologies that demand from us more and more time each year.  The nonhuman animal world is as fascinating and important to Abbey as the teeming social dramas of the urban East, where he will return to unhappy exile after his seasonal tenure at Arches.  This sense of deconstructing the deadly human-centeredness that allows our natural world to be blithely destroyed for the sake of transient profits is one of Abbey’s fundamental contributions to the environmental movement and more generally to the history of philosophical idealism.  Encountering a pair of mating gopher snakes near his ranger’s hovel, Abbey claims to feel emanations of “sympathy, mutual aid, symbiosis, [and] continuity” from the reptiles, whose presence he welcomes for controlling mice.  (“I prefer not to kill animals,” he says elsewhere, paraphrasing Robinson Jeffers.  “I’m a humanist; I’d rather kill a man than a snake.”)

“How can I descend to such anthropomorphism?  Easily—but is it, in this case, entirely false?  Perhaps not.  I am not attributing human motives to my snake and bird acquaintances.  I recognize that when and where they serve purposes of mine they do so for beautifully selfish reasons of their own.  Which is exactly the way it should be.  I suggest, however, that it’s a foolish, simple-hearted rationalism which denies all forms of emotion to any animal except man and his dog.  This is no more justified than the Muslims are in denying souls to women.  It seems to me possible, even probable, that many of the nonhuman undomesticated animals experience emotions unknown to us.  What do the coyotes mean when they yodel at the moon?  What are the dolphins trying so patiently to tell us?  Precisely what did those two enraptured gopher snakes have in mind when they came gliding toward my eyes over the naked sandstone?  If I had been as capable of trust as I am susceptible to fear I might have learned something new or some truth so very old we have all forgotten it.”

Pondering the unknowable remains Abbey’s favorite occupation throughout the book, and indeed in all his later works: how to live, how best to die, what or (more likely) what does not await us in the next world.  His ruminations on the mortal sphere recall the musings of Pascal, Hegel, Montaigne and Schopenhauer as much as Thoreau, but Abbey’s prose style, always crafty and barbed, ensures that we are never threatened with a dry academic display.  An inveterate wonderer, Abbey—who received a master’s degree in philosophy from the University of New Mexico—was never satisfied to leave even the most profound and unknowable questions unasked.  Upon arriving back at camp after helping to haul the carcass of a misplaced and sun-dried tourist out to the highway, Abbey reflects on the ephemeral quality of life on earth and the transience of death to the universe:

“Southwest, toward Grandview Point and The Maze, I can see V-shaped black wings in the lonely sky, soaring higher and higher in the yellow sunset.  I think of the dead man under the juniper on the edge of the world, seeing him as the vulture would have seen him, far below and from a great distance.  And I see myself through those cruel eyes.  I feel myself sinking into the landscape, fixed in place like a stone, like a tree, a small motionless shape of vague outline, desert-colored, and with the wings of imagination look down at myself through the eyes of the bird, watching a human figure that becomes smaller, smaller in the receding landscape as the bird rises into the evening—a man at a table near a twinkling campfire, surrounded by a rolling wasteland of stone and dune and sandstone monuments, the wasteland surrounded by dark canyons and the course of rivers and mountain ranges on a vast plateau stretching across Colorado, Utah, New Mexico and Arizona, and beyond this plateau more deserts and greater mountains, the Rockies in dusk, the Sierra Nevadas shining in the late afternoon, and farther and farther yet, the darkened East, the gleaming Pacific, the curving margins of the great earth itself, and beyond earth that ultimate world of sun and stars whose bounds we cannot discover.”
Powered by