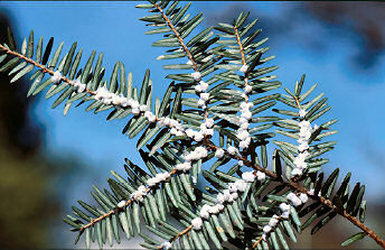 First published on 9.9.13 on the Earth Island Journal website
When summer tightens its muggy grip along the Eastern seaboard, many of us follow our forebears’ historical lead and seek shelter in the breezy shade of the Appalachian forests. Cooled by canopies of mighty hemlock trees, the runs and rivers of the southern Alleghenies and Blue Ridge mountains sustain a distinct microclimate that fosters a diverse host of fish, amphibians, and birds more typically encountered far to the north.

These days, however, the comfortable retreat is tinged with sorrow, if not outright alarm, as hikers and anglers are confronted with the steady demise of a species once dominant in streamside ecosystems and along montane slopes from New England to Georgia. Our native hemlock trees, both Eastern (Tsuga canadensis) and Carolina (Tsuga caroliniana), are in their death agonies. An exotic insect called the hemlock woolly adelgid (Adelges tsugae) is wreaking havoc among hemlock stands throughout the eastern United States.

The results are appalling. As the hemlocks die out, the denuded streams become open to the sun, heating them to temperatures unacceptable to cold-water brook trout and other organisms that co-evolved within the hemlock’s nurturing shade. A walk along most streamside trails in western Virginia today reveals a funereal assemblage of dead hemlocks jutting skyward like skeletal arms, blasted of their needles and shrouded with gray lichens.

The hemlocks’ death then causes a ripple effect of negative impacts. Riverbanks become unstable as the dying roots relax their grip. Gaps in the canopy allow parasitic cowbirds access to the nests of other birds. The region’s unique species of amphibians, already in the midst of a ruinous decline, are placed under further stress as their eggs are exposed to increased heat and ultraviolet radiation.

The gradual annihilation of our native hemlocks threatens to equal the great chestnut blight of the last century in the magnitude of its long-term environmental consequences. And it’s all due to a dull, lead-colored bug less than a millimeter in length.

Introduced to Richmond, Virginia, in the 1950s through the importation of Japanese weeping hemlocks via the nursery trade, the hemlock woolly adelgid (or HWA) was ignored for half a century, and by then had become well established. In 1992 the US Forest Service, preoccupied with other introduced plagues such as the gypsy moth, finally turned its attention to the accelerating decline of hemlocks in the East. (Western states had been exposed to HWA since the 1920s, but the two hemlock species there had evolved defense strategies to native adelgid insects and were largely unharmed).

Detectable by their egg cases, which resemble ragged clots of fouled cotton adhering to the underside of hemlock branches, HWA reproduces asexually and can spawn two generations each year. The insect feeds on the sucrose-carrying phloem sap of hemlock shoots, causing the tree to lose needles and gradually wither away. Death typically occurs four to ten years after infestation. Even trees that survive the direct effects of HWA infestation are fatally weakened against other pests and environmental stressors.

Brad Onken is a forest entomologist based in Morgantown, West Virginia, and a nationally recognized expert on the HWA. He recently retired after spending 30 years with the Forest Service, where he says that 95 percent of his work dealt with the HWA infestation. “Eastern hemlock has always been my favorite tree for many reasons,” Onken says. “Anyone that has wandered into an old growth hemlock forest can appreciate the cathedral-like ambiance this tree offers. HWA is a pest that threatens to wipe out the primary old-growth tree species in the East.”

Hemlocks, as it happens, can live for more than 600 years, and are so patient to assume control of the forest canopy that they can wait three centuries to reach their full height, lingering in the shadow of their rivals for them to succumb to age, disease or fire, then seizing their chance for a vertical leap into the sunlight.

“As we learned over the years, this tree is not only important aesthetically, but even more importantly it is an ecological keystone species, meaning without it a whole cascade of ecological impacts occurs to the native flora and fauna that it supports” Onken says. “As hemlocks decline, increased levels of sunlight will penetrate to the underlying forest strata, causing massive changes in vegetation and consequentially in wildlife habitat. There are no other tree species that can replace hemlock in this capacity.”

The hemlock, one could say, is like an Atlas of our Eastern forests, shouldering a mighty responsibility for entire natural communities, perhaps nowhere greater than along the mountain rivers and fast-running streams where its yearlong shade cools the rushing waters that trout depend upon, while its primal root systems grip the riverbanks in a soil-stabilizing embrace.

Given its importance to forest health, particularly in riparian areas where the hemlock’s shading effect is critical for keeping streams cool in a warming world, what can be done to arrest and reverse the HWA onslaught? Chemical control would entail application by hand to each individual hemlock in the eastern US – not exactly a practical solution. Mass spraying of pesticides from the air would necessarily impact a wide range of beneficial insects and other wildlife. The answer must lie outside the pharmaceutical realm.

As it turns out, the Eastern and Carolina hemlocks are the only members of the species that didn’t have of co-evolve with an adelgid, so they lack adaptations to protect themselves against HWA. This also means that HWA has no native predators in the eastern US. But in the Pacific Northwest and overseas there live a number of adelgid enemies, and scientists are enlisting them in a multipronged attack to roll back the HWA epidemic.

Meet Laricobius nigrinus, Sasajiscymnus tsugae, and Scymnus sinuandolus: small predatory beetles, the first native to the American West and the other two, which belong to the voracious ladybug family, from East Asia. Since HWA is active in the fall, winter and spring, foresters have selected predators that are active during the same periods, giving HWA no repose in which to recover its numbers. Laricobius beetles feed on the developing nymphs, adults and eggs of the first HWA generation (fall, winter and early spring) while the ladybug predators attack the second generation (late spring and early summer), a double whammy that has proven effective in preserving hemlocks.

Yet even with these biological controls in place, Onken says, “It’s not very likely that the beetle predators will completely eradicate HWA, so our goal is to establish a natural enemy complex that will keep HWA populations from damaging tree health, much as they do in these insects’ native range.”

So after inadvertently introducing a nonnative pest, we’re combating it by bringing in nonnative predators, effectively creating a new, nonnative overlay of biological checks and balances and altering the equilibrium of the indigenous forest, an ancient equipoise developed over slow eons by evolutionary factors we can only begin to understand.

But what choice do we have? Lurching along from one ecological crisis to the next, serially bewildered that nature has again rebelled against our best-laid plans, our carelessness continues to force us into the unwelcome position of amateur ecological architect, forever scrambling to repair our errors and bracing for the next inevitable calamity.
Powered by